The day started off great as I volunteered to drive and don’t get the opportunity very often anymore. I was already giddy with excitement being able to chauffeur some of the cooks around for the day.

After meeting up at the car rental place and having a bit of a confusion there, we were on our way to pick up the crew. Once settling on a route we took to the road on our way to Hagersville Ontario to see some lamb and cattle.

The drive was pretty good other than one of our colleagues lagging behind a bit due to the fact he drives like an old man on Sunday’s. It’s really nice being out in the country. The rolling hills and trees. You don’t get to see many trees in the city, or grass for that matter. Everyone in the van was more content being out there looking over the landscape. The drive even took an unexpected turn when we had to stop for a crossing of what I think was either wild turkey or partridge. A neat little experience that had everyone in the vehicle pressing their faces against the windows remarking how “cool” that was.

We had to make a quick pit stop at a gas station because the rental agency clearly lied about how far we could get on half a tank. That, and the fact that the cooks have bladders the size of young children. After about an hour and a half we came across an unassuming little barn house on a county road in the middle of nowhere. The smell of manure and hay filling the air was welcoming and not overwhelming. We pulled in the driveway next to a giant green tractor that people immediately started taking pictures next to. City folk are funny sometimes – “Hey look at me next to this tractor which we rarely come across in cement jungle land”.

The farmer came to meet us and was what you’d expect from such. A large towering man, dirty overalls, hadn’t shaved in a while, but surprisingly soft spoken.

We did our introductions, took a few photos, and got warned by the Chefs to stay away from the electric fence.

Walking in to the sheep barn we were greeted by some baby lamb being fed by their mothers. 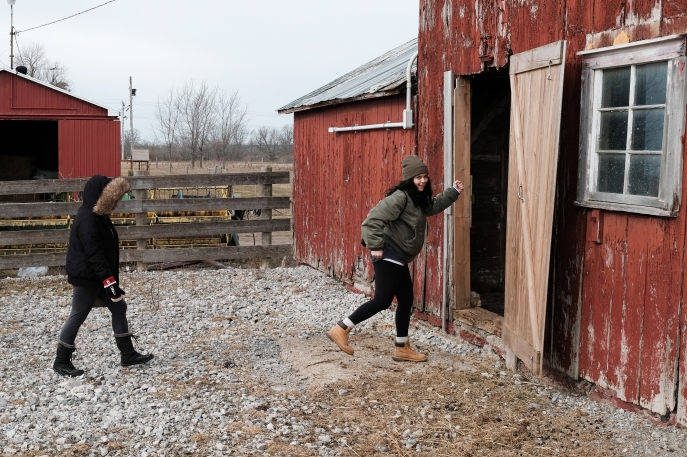 We were then spoken to about how the sheep get impregnated and the selection process in which animals are kept and allowed to mature to sheep for wool or sent off as lamb to be produced. We also learned about the adopting process in which female sheep can only really care for about 3 lamb, so if they have more than 3 they need to “orphan” the lamb to a sheep who has less. We then got to go into the sheep pen where there were well over 100 animals. They were frightened at first but quickly came up to us for a bit of affection. 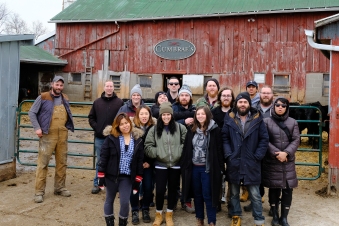 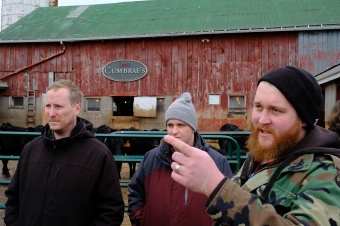 The wool is so soft and pillowy. No wonder everyone seems to like wool stuff. We learned about the type of hay they like to eat which is mixed with silage, the breeding process, and how they interact with one another. It was really interesting as the operator was incredibly knowledgeable about his animals.

Afterwards we took off to the cattle farm. This was more like the farms you read about in books. It had the big red barn of course, the hockey pond out front, and large grain silos lining the side of the property.

We were given a quick tour of the equipment and the feed, then introduced to the Black Angus and Wagyu breeds.

There was also a cross breed which the name now escapes me. We were informed again on processes such as breeding, selection for meat, and feed. The cattle were surprisingly friendly as well, coming up to us in general curiosity.

Shortly after the farm tours we were back on the road toward Dundas Ontario for a wonderful lunch at Quatrefoil restaurant. The town was small and quaint, and the restaurant was a little cottage style house with a really great look to it. The interior was very classy but welcoming, with a nice looking patio that would be a good spot to spend a sunny afternoon. The restaurant staff did an amazing job setting up a nice private room for us outside the kitchen.

Food was spot on at this place. The bread all made in house was unreal, with a sourdough, cheese twists, little popover style gougers, and a sweet bread which I think was some kind of molasses rye. Either way they were all delicious, with nice salty butter. For lunch we had sun choke soup, Cumbraes meatloaf with squash and Brussels sprouts, and a chocolate banana bombe. Nice spread and a well spent lunch hour which I’m sure everyone on the trip would agree with. We all left wanting to take a nap after that filling meal, which a few of the people not driving happened to do. Nice life!

The drive home was a bit of a mess. Our van happened to somehow go from half a tank to nothing in a matter of 5 minutes. This unfortunately made us have to get off the highway and find a gas station. Topping it all off it started to downpour on the way back into the city, slowing everyone down. We unfortunately didn’t make it to Cumbraes in time for the tour, but we got to see the shop which was beautiful. The selection of dry aged beef, pork, chicken, prepared foods, condiments, pies, etc. was mind blowing. I definitely didn’t expect them to have as much of a selection, but one can only assume that is why they’re one of the most popular butcher shops in Toronto.

Departing back to the Distillery everyone was in good spirits and a little bit more educated from the day’s activities. Smiles all around and happy cooks. Definitely a great way to spend a day when you live and breathe food. I would recommend a visit to these places to any cook I know.

David Semotiuk, Line Cook @ El Catrin Destileria
Hey Chef Tim,
I just wanted to thank you again for the field trip to Cumbrae farms. It was an interesting place to go see, and a stark contrast to see the fourth generation farm being so old and being surrounded by so many windmills. That seemed to be how he chose to raise his animals, by combining the best of older techniques and modern ones. I was surprised they fermented the hay but from a storage and animal health point of view I think it is a really good solution. It was funny seeing him talk about portion control by weight, when feeding his cows. It is a good reminder that any waste you can cut is profit.
The main thing I took away from the trip though is the idea that as chef I think we have to pay for flavor not weight of beef. That can mean little things like not misting at the abattoir, breeding for a smaller eye or taking the time to dry age like they do. When you have the opportunity to work with someone as knowledgeable about animals you really can get a premium flavour as well as the product you want.
Lana Golub, Cluny Bistro

First let me say thank you again for the opportunity to attend the last DRC field trip. In my opinion its outings like this that set us apart from other restaurant groups in the city.

Cumbrae Farms was amazing,  but smaller than I imagined. I have shopped with Cumbrae’s for years and to get the opportunity to speak directly to the person responsible for raising the meat I have been purchasing was a unique and rare opportunity most Chefs do not get. I found it very interesting to physically see the difference in build and temperament between the breed of cattle on the farm.
Highlight of the trip for me was our stop for lunch at Quatrefoil! Absolutely stunning room with great food in small town Ontario. The Menu far exceeded expectations and the company was pretty good as well! Its really great to get the opportunity to share a meal sitting down with my co workers!

These type of trips are important and I would like the opportunity to be more involved in the planning process moving forward. Im currently looking into the possibility of Sylvania Farms having a group of us out to see their facility. They are raising Mangalitsa Pigs as well as goats, cows, and chickens in the Niagara region. I believe they are running a small scale charcuterie operation as well.

I had never been at farm like here before, it was the first time to be there. It is incredible how they raise their lamb/sheep and beef, and they grow their feeds as well. The farms are not huge operation, but it is 4th generation’s farm and well-maintained farm and honest. The animals are going to the local butcher shop. That means we can buy the meat which are we can know where they from and how they raised. This idea is remarkable.
It was such a great time ever and the experience gives me an idea that in some points, it is really exciting to know about your food; where they from, how they grow, who done by,,, so on.

Thank you chef for giving me the opportunity and this was so impressive and awesome!! wagyu lookin at you 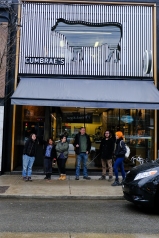